Key morphological features: The Corbulidae are small to medium sized, up to ~35 mm. The shells are inequivalve, with the right valve usually larger and ventrally overlapping the left. They are solid, and trigonal in shape. The posterior end is rostrate and the anterior end is usually rounded. The shell is composed of aragonite and exterior sculpture is typically commarginal or smooth, with strong radial ridges on the left valve. Valve interiors are non-nacreous, and the weak pallial line has a shallow sinus. The interior shell margins are smooth. Species of Corbulidae are either isomyarian (adductor muscles are equal in size) or heteromyarian (anterior adductor muscle slightly smaller). The weak heterodont hinge has one tooth in the right valve which fits into a socket on the left valve; lateral teeth are usually absent. Source: Mikkelsen, P.M., and Bieler, R. 2008. Seashells of Southern Florida: Bivalves. Princeton, New Jersey: Princeton University Press. 503 pp.

Paleoecology: The Corbulidae are marine or estuarine suspension feeders. They live either infaunally, buried in muddy sand, or epifaunally in shell hash. Corbulids can occur together in extremely large numbers, and are very tolerant of fluctuating environmental conditions. They can be found worldwide in shallow to moderately deep water. Source: Mikkelsen and Bieler (2008). 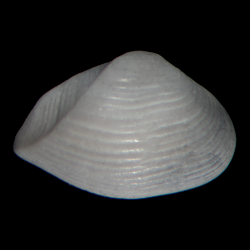 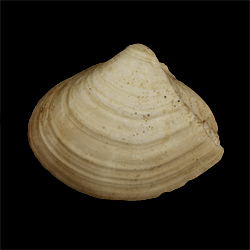 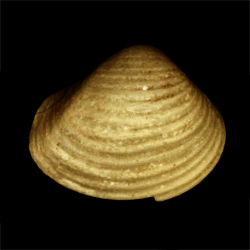