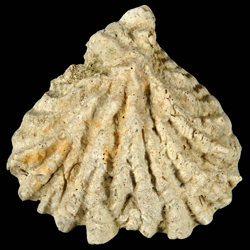 Key morphological features: The Plicatulidae are generally less than 100mm in size. The shells are compressed and equivalve or inequivalve, with inequivalve species most often having a more inflated right valve than left. They are variable in outline, but generally trigonal to oval, and occasionally have anterior and posterior auricles. The shell is composed of a combination of aragonite and calcite, and exterior sculpture usually consists of strong radial folds. The Plicatulidae live permanently attached to hard substrates, so the shell exterior also has an attachment scar near the umbo, but attachment can be by either the left or the right valve. Valve interiors have a simple, uninterrupted pallial line and the interior shell margins are crenulated, reflecting the exterior ribbing. Species of Plicatulidae are monomyarian, having only a posterocentrally positioned posterior adductor muscle as adults. The hinge features a trigonal resilifer flanked by prominent secondary isodont teeth. Source: Mikkelsen, P.M., and Bieler, R. 2008. Seashells of Southern Florida: Bivalves. Princeton, New Jersey: Princeton University Press. 503 pp.

Paleoecology: The Plicatulidae are marine, filter-feeding bivalves that live permanently cemented to hard substrates. They can be found in warm, shallow waters worldwide. Source: Mikkelsen and Bieler (2008).

Phylogenetic status: There is only one living genus in family Plicatulidae.