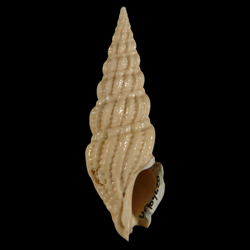 "Shell highly polished, moderately large and heavy, sharply constricted at the base of the body. Whorls convex, acutely tapering, of 13 component volutions, the first 2.5 included in the smooth polished protoconch. Initial half turn of protoconch for the most part submerged; succeeding volutions erect, broadly inflated, and strongly constricted at the suture; the final nuclear whorl gradually flattening and usually of smaller diameter than the whorl behind it. Line of demarcation between conch and protoconch obscure and irregular, indicated by the introduction of the axial sculpture in the form of narrow riblets, 10 to 12 to the whorl, persistent from suture to suture, sharply pinched posteriorly, broader and more obtuse medially, and separated anteriorly by wider, concave intercostals, most deeply depressed a little in front of the suture line. Spirals not introduced, as a rule, until the third volution and not perceptibly impressed until the fourth; anal fasciole developed upon the fifth or sixth. Adult whorls strongly convex for the genus, constricted both at the posterior and the anterior suture; posterior margin elevated and closely appressed, forming a rather narrow sutural band. Axials numerous, 17 or 18 upon the later whorls but irregular and, for the most part, obsolete upon the final half turn, normally assuming the form of acute, elevated ridges, fairly uniform in prominence from the anterior suture to the fasciole, which they cross, though with diminished strength, even appearing as obscure nodes upon the posterior sutural band, and persisting on the body whorl almost to the base of the pillar; intercostal areas obtusely V-shaped, a little wider than the costal, somewhat pitted at the fasciole. Spirals manifested as impressed linear sulci, equal and regular in size and spacing, 4 upon the antepenult of the type and 5 upon the penult, 10 to 12 upon the body and pillar, in some shells as many as 6 upon the penult, with a corresponding increase on the other whorls; sulci restricted almost entirely to the intercostal areas. Anal fasciole smooth, very narrow, not very sharply defined, indicated by the weakening of the costals and the more strongly depressed intercostals. Suture line distinct, impressed. Aperture rather wide. Outer lip standing apart, the margin thin, sharp, flaring incrementally but only slightly expanded. Constriction of the inner lip at the base of the body rather sharp. Labium smooth, heavily glazed, most heavily near the posterior commissure and along the pillar wall. Posterior siphonal notch very deep, broadly V-shaped, symmetrically disposed between the suture and the anterior margin of the fasciole. Anterior canal short, straight, rather wide. Anterior fasciole short, spirally lirate, incrementally rugose, deeply emarginate at its extremity.

The form varies decidedly in relative proportion and in the relative inflation of the nuclear whorls. In some specimens the fasciole is delimited by sulci, much as in A. subvaricosa, thus giving to the whorl the effect of being regularly striated from the sutural band to the anterior suture. These variations are apparently individual and of no systematic significance.

Agladrillia aulakoessa is the Chipola representative of the group of A. subvaricosa, from the Oak Grove fauna, and A. empera, from the Shoal River fauna. The forms have in common an elevated spire, a closely appressed sutural band with a narrow fasciole in front of it, numerous more or less /-shaped axials, and an impressed spiral sculpture, restricted for the most part to the intercostal areas in front of the fasciole and consisting of 4 to 6 sulci upon the later whorls of the spire.

The characters that separate the Chipola species from the other members of the group are the convex whorls, the ill-defined posterior fasciole, the more regular and more acute axials, which persist across the fasciole, and the somewhat more numerous and more deeply impressed spirals."