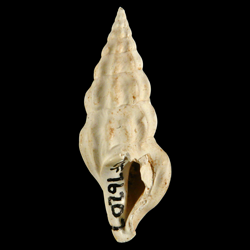 "Shell of moderate dimensions, rather stout, conic, the length of the aperture not much more than a third of the total altitude; body whorl short for the genus, rather sharply constricted at the base; whorls of the spire very closely appressed, decreasing regularly and rather rapidly in diameter. Protoconch large, smooth, shining, a trifle more than twice coiled, the initial turn for the most part immersed, the succeeding volution tumid and of approximately the same diameter as the first whorl of the conch. Beginning of conch indicated by a change in the texture of the shell, the appression of the posterior portion of the whorl, and the initiation of a feeble axial sculpture. Axials on early whorls 10 to 12 to the turn, decreasing to 10 or 11 upon the medial and anterior portions of the shell; axials obtusely rounded, a little more prominent at the periphery than upon the anterior portion of the shell, evanescent posteriorly on the later whorls though not on the earlier, opposite for the most part and almost vertical, thus regularly fluting the cone from the apex to the base of the body; interaxials concave, of approximately the same width as the axials except upon the final half turn, where they are irregular in size and spacing. Spiral sculpture absent over the entire surface, even upon the anterior fasciole. Posterior fasciole defined only by the close appression of the whorl and the more or less complete evanescence of the costae. Suture line distinct, crenulated by the axials of the preceding volution. Aperture rather short, widening posteriorly with the excavation at the base of the body. Outer lip very thin and sharp, almost vertical but widely expanded incrementally, the area included between the fascioles forming a subquadrate alate expansion. Posterior sinus profound, broadly U-shaped, symmetrically disposed between the periphery and the posterior suture. Labrum also finely but distinctly emarginate at the base. Labium sharply concave. Parietal wall heavily glazed, the callus especially thick directly in front of the posterior commissure. Pillar straight, simple, heavily reinforced. Canal very short, broad, open. Anterior fasciole heavily corrugated, very short, broadly and deeply emarginate.

Eumetadrillia rabdotacona is very abundant in the Shoal River fauna. It varies widely in relative dimensions. The young are decidedly stouter than the adults, but the variation in outline in the adults is so great that it is only after considerable hesitation that the differences have been judged not to merit taxonomic recognition. The axials also exhibit variations in number and prominence. They seldom fall below 10, but they may run up as high as 14 upon the later volutions. In some individuals they are rather acutely rounded, and they may even persist with greatly diminished strength across the fasciole, appearing in front of the suture as a series of inconspicuous retractive riblets.

This species is the representative in the Shoal River fauna of the group of Cymatosyrinx lunata Lea of the later Tertiary deposits. The Shoal River species is not constricted nor excavated at the fasciole, like the later Miocene form, nor do the axial costae evanesce so abruptly posteriorly and so completely. The axials are also less numerous and much less acute in E. rabdotacona and form a more obviously continuous series. The irregularity in the body ribbing is also much more marked in the earlier form, for there is commonly only a single normal rib and one abnormally broad and elevated protuberance upon the final half turn."