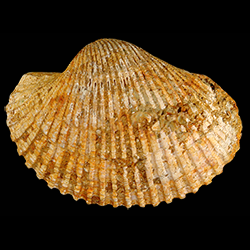 Shell of moderate size and thickness, arcuate below, straight above, with small but prominent prosocoelous beaks; left valve with twenty-seven square-topped, narrow, entire radial ribs, separated by wider interspaces; the ribs on the middle of the shell are somewhat narrower than the others; all are crossed by evenly spaced, moderately prominent elevated lines, festooned in the interspaces, and forming small, square ripples on the ribs; both valves similarly sculptured; cardinal area narrow, with elevated margins behind, wider and short in front of the beaks; the portion in front of the beaks is longitudinally striated, behind the beaks there are three or four concentric, lozenge-shaped groovings; a single transverse groove usually passes between the beaks; hinge-line straight; teeth in two nearly equal series, overlapping a little proximally, the teeth rather crowded and nearly vertical; base of the valves arcuate, rounded into the anterior end, posterior end a little produced; internal margins of the valves fluted. Lon. 41, alt. 28, diam. 26 mm.

This very neat and distinct species appears to be the most common Ark in the upper or Miocene bed at Alum Bluff."