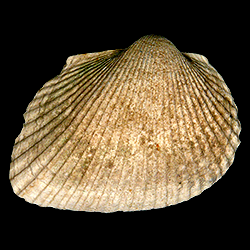 Shell of moderate size, rather thin, rhomboidal, with small, prominent, mediosulcate, prosocoelous beaks situated at about the anterior third of its length; left valve with about thirty-seven squarish subequal radial ribs, separated by narrower channelled interspaces; on the tops of these ribs are four longitudinal threads, the inner pair larger and more prominent but separated by a somewhat deeper sulcus than those external to the inner threads; concentric sculpture of fine, close, rounded, slightly elevated threads, which overrun the whole shell, ribs, and interspaces, and at short intervals, at the intersection with the inner pair of rib-threads, they become minutely nodulous, while the reticulations have a punctate appearance, giving a surface somewhat like fine lace and peculiar, as far as observed, to this species; cardinal area short, rather narrow, with sharply elevated boundaries and a single incised set of grooves forming a lozenge-shaped figure anteriorly; hinge-line short, teeth in two adjacent series, anterior with fifteen, posterior with twenty-six or twenty-seven teeth set vertically, a little oblique at the distal ends of the series; each individual tooth more or less grooved or striate in the direction of motion, as in some recent species; anterior end of shell produced, rounded; posterior end subtruncate, base slightly arched; inner margin of the valves with rather long, deep flutings, corresponding to the external ribs. Lon. 32, alt. 27, diam. 20 mm. (twice the diameter of the single valve).

A single valve of this very elegant species was obtained by Mr. Burns. Its sculpture differentiates it from all our other Tertiary species. Arca callipleura Conrad, in which the ribs have a minute nodular sculpture, has the radial threading predominant, while in this species the concentric threads overrun all the rest. The two species are entirely distinct otherwise."