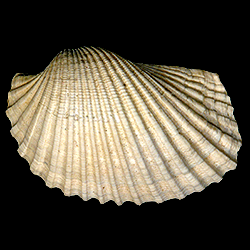 Shell of moderate size, solid, and heavy, with a straight and angulate upper margin, obliquely rounded anterior, produced posterior, and arcuate basal margin ; beaks low, much incurved, mesially impressed, and rather anterior; left valve with about twenty-two narrow ribs separated by wider interspaces, crossed by little elevated, regularly spaced incremental lines; the ribs are not nodulous, the anterior ones are flattish or rarely have a shallow sulcus mesially near the margin; they are subequal, but in specimens in which the mesial depression of the valve is especially strong, the ribs included in it are narrower and closer together than usual ; hinge-line nearly as long as the shell, angular, but not auriculate distally ; the beaks are within the anterior third; cardinal area wider in front, narrow behind, longitudinally striated with a few grooves which circumscribe a "stemmed" arrow-head figure, few of them reaching as far forward as the beaks; teeth in two adjacent series, the anterior shorter with a pronounced thickening of the shell below it, over the vertical face of which the teeth extend rather irregularly or are supplemented by denticular wrinkles; posterior series longer, numerous, vertical, distally much wider, and more or less oblique ; interior margin of the valves with strong, short flutings. Lon. 47, alt. 28, diam. 27 mm.

This is quite a peculiar species, the teeth of which recall Argina, while all the other characters of the shell indicate its section to be Anadara, another instance, if one were needed, to illustrate the mutability of the dental forms in this family. It cannot be confounded with any of our other species."