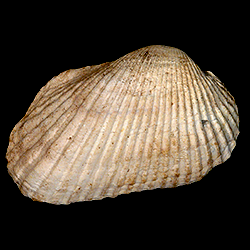 Shell of moderate size, solid, rather rude, the posterior end strongly twisted to the right, the beaks low, and the form somewhat compressed; the umbones are very slightly bent forward, and are situated at about the anterior third; left valve with about thirty low, flat radial ribs, becoming wider and sparser posteriorly, crossed by rather rude incremental lines, but not nodulous or dichotomous, and with subequal, rather shallow channelled interspaces; the right valve is similarly sculptured and somewhat smaller; cardinal area rather long, narrow, with numerous slightly angular, longitudinal grooves; ends of the hinge-line moderately angular, anterior end of shell rounded, posterior produced, base flexuous, inner margins fluted; teeth numerous, small, uninterrupted, nearly vertical, the distal ones larger and tending to break up into granules. Lon. of a large valve 50, alt. 34 mm.; of figured specimen, Ion. 38, alt. 27, diam. 20 mm.

This species is one of the most abundant in the Floridian Pliocene, and is easily distinguished from any other by its compressed appearance and twisted shape. Some of the allied species have a slight flexuosity, but in none is this feature so pronounced as in A. campyla. A variety with thinner shell and narrower and slightly more elevated ribs was at first thought to be distinct, and may be named var. aeretea. It is figured plate 32, figure 22."