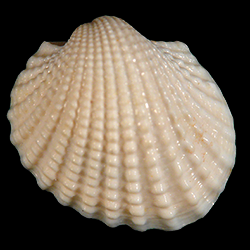 "Shell small, solid, inequivalve, inequilateral, cordate-trigonal when viewed from the exterior, the interior rudely quadrate. Umbones well rounded, prominently elevated medially, sulcate only toward the apices, which are incurved, prosogyrate, placed a little in front of the median vertical and at a moderate distance from one another. Anterior area rounding smoothly into the medial, the posterior obliquely flattened and defined in the left valve by an obtuse keel, which in the right valve is obscure or obsolete. Dorsal margin straight, not quite equaling the maximum width of the shell. Anterior margin very feebly expanded, merging smoothly into the upcurved base. Ventral margin diverging slightly from the dorsal toward the posterior extremity. Postero-ventral margin obtusely angulated. Posterior lateral margin oblique, intercepting the dorsal at an angle of a little more than 90°. Sculpture markedly discrepant in the two valves; ribs approximately 21 in number in each, the 7 or 8 anterior ribs of the right valve and the 5 posterior feebly nodose, the 8 or 9 intermediate costals smooth and flattened upon their summits and separated by intercostal channels of approximately their own width; radials upon the anterior and medial portions of the left valve heavy, obtusely nodose, separated by deep and narrow intercostal channels; radial outlining the posterior keel the broadest upon the valve, nodulated in the young, smooth in the fully adult; posterior ribs relatively narrow and widely separated, feebly nodose in the young, nearly smooth in the adult. Inner margins crenate in harmony with the external sculpture, the flutings persisting into the interior of the shell almost to the umbones. Cardinal area rhombic in the double valves, narrower and more produced behind the umbones than in front of them. Area of ligament attachment more symmetric than the cardinal area, for the most part opisthodetic and outlined by two deep grooves diverging from a point a little behind the apices of the umbones. Hinge narrow, the ventral margin feebly arcuate; hinge teeth about 30, very fine and approximately vertical medially, a little coarser distally and somewhat oblique. Anterior adductor rather small, roundish, placed just within the extremity of the hinge. Posterior adductor larger, more irregular in outline, less dorsal in position than the anterior. Pallial line simple, parallel to the outer margin, and at some little distance from it.

This small species, which suggests Cardium (Fragum) in its general appearance, is the analog of the Chipola D. initiator. The Oak Grove form is the larger of the two, is less globose, and is relatively broader. The costals number approximately the same in the two species, but those of D. cardioides are a little heavier. In both species there is considerable variation in the number of ribs, which may be as high as 25."