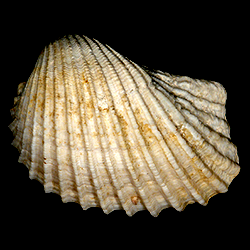 Shell elongate, solid, subrhomboidal, with very anterior, high, prosocoelous beaks; right valve with twenty-three strong, narrow, rounded ribs, separated by wider, very deep channelled interspaces; concentric sculpture of incremental lines, which are slightly elevated at regular intervals, and cause over much of the valve the tops of the ribs to appear obscurely nodulous; the ribs on the anterior end, though simple in the young, are sharply mesially sulcate in the adult, those on the posterior dorsal slope lower and more rude than those on the body of the shell; the hinge-line is straight, the cardinal area differs from that of A. rustica only by having but a single transverse groove anteriorly between the beaks; both valves are similarly sculptured, but no adult left valve was collected; the hinge-line is straight and shorter than the shell; there are about fifteen anterior and four times as many similar vertical posterior teeth, the proximal ends of the series slightly overlapping; the hinge-line in the specimen figured is forty-six millimetres long, the vertical of the beak falls at 8.5 millimetres from the anterior end; inner margins thickened, with short flutings. Lon. 55, alt. 36, diam. 45 mm.

This fine species appears to be rare, and was found only at Alligator Creek, where two adult right valves, one young pair, and some fragments were obtained. The young has much the outline of A. auriculata, but is not markedly auriculate. It is proportionately shorter than the adult. The species belongs in the same subordinate group as A. rustica, as shown by the minor characters.

A single broken valve, probably of this species, is among the material from Shell Creek."