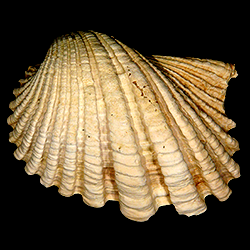 "Shell subquadrangular; ventricose, ponderous, ornamented with about twenty coarse, elevated, transversely barred, terete, ribs, which are somewhat irregular and crowded on the anterior half of the shell, becoming widely separated and profoundly elevated on the posterior half; beaks nearly anterior, looking forward, separated from each other by a fairly broad interval; hinge-line almost as long as the greatest length of the shell, pectinated with numerous narrow, nearly vertical teeth; ligamental area narrow, elongated, with about six longitudinal lines, which rise toward the apex of the beak; interior of the shell coarsely rugated; base ascending anteriorly, profoundly crenated.

This shell can be readily distinguished by its profoundly elevated and widely separated ribs, being the most coarsely costated Arca with which I am acquainted. It closely resembles Arca rustica, of Tuomey and Holmes (Pliocene Fossils of South Carolina, p. 39, pi. xv, fig. i), and may, indeed, be that shell. Unfortunately, these authors have given but a very meagre and unsatisfactory description of their species, which barely permits of an absolute determination being made. Their figure, drawn from a mere fragment, does not represent the profound ribs seen in the Florida fossil; the posterior interspaces are apparently also much narrower, nor does there appear to be any marked variation either in the disposition or the size of the costal. Still, the differences here indicated, which are based upon figure and description only, may be more apparent than real, and the two forms, as above intimated, may in reality represent a single species. Unfortunately for the determination of this point, the only perfect valve possessed by Tuomey and Holmes was lost before the publication of their monograph, and the fragment which served as the type of the species, for both figure and description, and which, as far as I am aware, was the only other specimen extant illustrating the species, has since been lost from the collection of the South Carolina geologists. I am informed to this effect by Prof. Whitfield, of the American Museum of Natural History, of New York city, where the type collections of the South Carolina Survey are deposited."