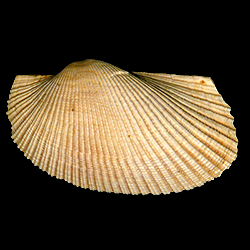 "Oligocene of the Ballast Point silex beds, Tampa Bay, of the lower bed at Alum Bluff, and of the Chipola marl, Chipola River, Florida.

Shell of moderate size, long, inflated, with rather low, mesially compressed, prosogyrate beaks; left valve with about forty-three deeply channelled, flat-topped ribs with fine, regular, concentric beading, except on the posterior slope, where the ribs are lower, flatter, and obsoletely channelled; near the margin some of the ribs have a second set of finer grooves; hinge-line straight, anterior end descending vertically, then obliquely rounded into the base, which is nearly parallel with the hinge-line; the posterior end descends more obliquely and the basal angle is prolonged a little and rounded; the interspaces between the ribs in both valves are very narrow, and on the right valve the beading is less conspicuous; the cardinal area is somewhat concave, flattish, with three or four concentric grooves in lozenge form; teeth of the hinge similar, numerous, not interrupted, short, vertical, the distal teeth a little longer and more oblique; margin of the valves fluted, the right valve slightly smaller than the other. Lon. 50, alt. 25, diam. 20 mm.

This species has the appearance of being the Oligocene ancestor of the Miocene A. lienosa, from which it differs by its smaller size, closer and rather narrower ribbing."