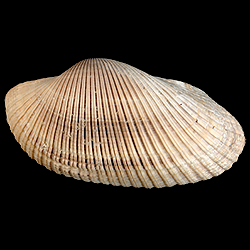 Note that Middle Pleistocene map point for species in northern Florida is in error and will be corrected in the future.

"Shell rather thin, transversely oblong; ribs about forty, somewhat flattened and much broader than the intervening spaces which are very narrow, and with a longitudinal impressed line, particularly on those of the posterior margin, which are almost bifid; and with numerous slightly elevated transverse lines, which being divided by the longitudinal striae appear granulated: beak but little prominent, and nearly opposite to the posterior third of the length of the hinge margin: area narrow and elongated: hinge margin rectilinear, angulated at each extremity; teeth numerous, small; posterior margin obliquely rounded inwards, no part of it extending further backward than the angle: anterior margin obliquely truncate: inner margin crenate.

OBSERVATIONS. A fossil shell from the same locality as the preceding, and also sent to me by Mr. Elliott.

REFERENCE TO THE PLATE. Fig. 1, Exterior and Interior views. Pl. 36"