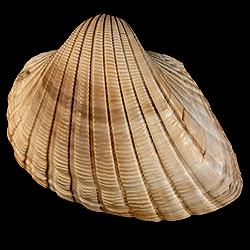 Some workers recognize this species as Scapharca scalarina.

"Shell obliquely rhomboidal, elevated, ventricose, angulated posteriorly, flattened; anterior end short, everjy rounded; beaks prominent, transverse, about eight, distant; ligament-area diamond-shaped, nearly smooth in the young shell, with delicate transverse lines in the adult, with a limited number of coarse, sinuous longitudinal lines; hinge-line straight, somewhat more than one-half the greatest length of shell; teeth numerous, somewhat oblique toward either end. Ribs prominent, about twenty-four, broad, square, robustly crenate, those of the left valve broader than the interspaces, flattened posteriorly, about eight on the anal angulation; those of the right valve of about the same width as the interspaces (the anterior ones the broadest), with an interstitial secondary rounded rib in the centre of the interspace; the two valves unequal, the basal margin of the left valve greatly protruding beyond that of the right; base profoundly crenulated.

Abundant in the banks of the Caloosahatchie below Fort Thompson."