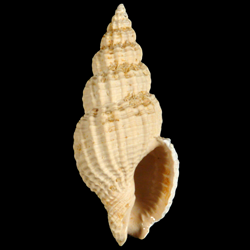 "Shell small for the genus, slender, ovate-conic in outline. Whorls of conch probably 6 although the earliest turn of the protoconch is broken away in the unique type and the apex is so badly decorticated that the dividing line between the conch and protoconch has been obliterated. Whorls of conch increasing regularly in diameter, somewhat buccinoid in outline, the later volutions rounding much more strongly posteriorly than anteriorly. Ornamentation reticulate. Axials narrow, rounded upon their summits, persisting with uniform prominence from suture to suture and well down to the base of the body, 12 on the antepenultimate whorl of the type, increasing to 19 upon the final whorl of the spire and twenty-odd upon the body, including the rather crowded and irregular costae near the aperture. Intercostal areas concave and usually wider than the costals. Spirals overriding the axials. Primaries rather broad, sharply defined fillets expanding slightly upon the summits of the axials, subequal in size and regularly spaced, 5 on the later whorls of the spire, the posterior a little less prominent than those in front of it, and 8 on the anterior and medial portion of the body; 1 or 2 finer spirals between the posterior primary and the suture; 6 primaries on the base of the body and the pillar, narrower, sharper, and rather more elevated than those upon the medial portion and somewhat nodose at the intersection with the axials. Except upon the base of the body 3 or 4 microscopically fine and linearly spaced lirae between each pair of primaries. Sutures impressed, finely undulated by the costae of the preceding whorl. Aperture moderately wide, obliquely lenticular, acutely angulated posteriorly. Outer lip broadly arcuate, finely crenulated along its margin in harmony with the external sculpture. The "stromboid notch" a broad and barely perceptible depression at the base of the outer lip.

Internal lirae not very prominent and not persisting to the outer margin, 6 within the anterior and medial portion of the whorl, corresponding in position to the interprimary areas of the external surface; an approximately equal number of finer lirae developed in front of them. Excavation at the base of the body rather sharp. Parietal callus thin except directly in front of the posterior commissure; pillar more heavily reinforced. Marginal fold elevated but not sharp; sulcus behind it broad and rather shallow. Anterior fasciole fairly wide, feebly arched, threaded with about half a dozen lirae intersected by flexuous incrementals. Anterior canal rather short, broad, recurved, deeply emarginate at its extremity, the produced posterior margin of the fasciole constituting one arm of the notch and the extremity of the fasciole the other. Umbilicus imperforate.

Tritiaria (Antillophos) dictyola is a relatively small and delicately sculptured precursor of the type of the subgenus, the Recent Antillean species T. (Antillophos) candei d'Orbigny. The Recent shell is much larger, the primary spirals are more inclined to be nodose at their intersection with the secondaries, and there is, as a rule, only a single secondary developed between each pair of primaries. The inner wall of the aperture is reinforced by short transverse lirae. that reflect the primary spirals on the base of the body and the pillar.

The callus fold developed on the inner body wall in the adult stages of T. candei and visible within the aperture is absent in T. dictyola, and the stromboid notch is broader and much less apparent than in the Recent species.

The type is unfortunately unique."