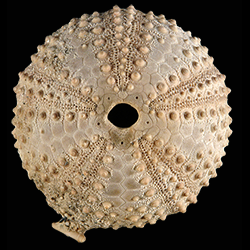 For information on the modern distribution of the species, see WoRMS.

To access the original description (Lamarck, 1816) in its original formatting through the Biodiversity Heritage Library, click here.

This fragile shell is seldom obtained in a perfect state from the Post-Pleiocene beds, and never with the spines attached; the specimen from which our figure is taken was procured from excavations made for the tidal drains in the upper part of the city of Charleston, and kindly presented to me by Dr. Wm. T. Wragg, the Alderman under whose superintendance the work was done. Fragments of the shell, and perfect spines, are often found in the sands of the Post-Pleiocene. It is the most common species now living upon the Carolina sea-coast.