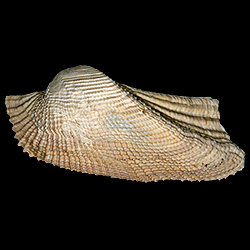 "Shell (known only by its left valve) elongated, rectangular, winged, profoundly sulcated on the posterior slope; anterior border vertical, straight; basal line slightly sinuous beyond the middle; posterior border deeply emarginated; hinge-line straight, of nearly equal length with the base; teeth very numerous, gradually increasing in size towards either end, where they are markedly oblique; hinge-area broad, obscurely furrowed in longitudinal lines; beak moderately elevated, incurved, the apex directed backward; surface of the shell radiately ribbed, the ribs sinuous, beaded especially on the anterior portion of the shell, where they are separated by an intermediate fine line becoming obsolete in the posterior sulcus and on the wing, where they are represented by two pairs of lines; lines of growth prominent towards the base and on the wing; basal margin crenulated.

This winged ark is at once distinguished from A. aviculaeformis (v. post.) by the absence of the anterior rostrum and its rectangular form. The last character, in addition to differences in the ornamentation, also serves to distinguish it from the Miocene Arca incilc, which resembles it somewhat in the pterination of the posterior slope."