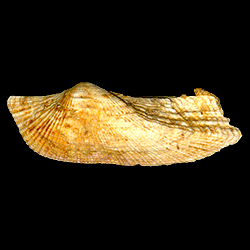 "Oligocene of the Chipola beds on the Chipola River, and of the lower bed at Alum Bluff, Calhoun County, Florida; Dall and Burns.

Shell elongated, not very thick or high, not much distorted, but with a variable byssal gape, inequilateral, the beaks at or near the anterior fourth; moderately alate in front and behind; beaks low, pointed, not inflated, their apices slightly prosogyrate, cardinal area long, narrow, lozenge-shaped, flattish, with longitudinal striae, the site of the resilium marked on each valve by two grooves forming a small triangle, within which are traces of the inception of other grooves; sculpture chiefly of fine radial riblets overrunning and somewhat imbricated by not prominent lines of growth; the radials which end on the margin of the byssal foramen are perceptibly finer than the rest, those on the posterior dorsal slope are more or less fasciculated, the ends of the fascicles dentating the posterior margin; on the dorsal anterior part the riblets increase somewhat in size, but are not fasciculated; the dorsal border in front is anterior to the rest of the margin; between the dorsal posterior extreme and the ventral posterior angle there is often an irregular but not deep emargination; the borders of the byssal foramen are irregularly emarginate; interior smooth, the margin denticulated by the sculpture except at the foramen; hinge-line straight, minutely denticulate; the teeth in the centre smaller, those towards the ends inclined outward slightly, above, and a little larger; there are about twenty-three anterior and forty posterior teeth, with no marked hiatus between the series. Lon. of shell 28, alt. of hinge-line 8.5, of beaks 10, diam. at the umbonal part IO mm. It is quite possible that the shell grows to a considerably larger size.

This species is distinguishable at once from the A. occidentalis of the same size by its uniformly more delicate and much more numerous ribs, and by its greater length in proportion to its height. It is also usually less alate behind, and of more uniform, undistorted shape. Differences of form and proportion seem to separate it sufficiently from A. subprotracta Heilprin.

Arca hatchetigbeensis Harris from the Lignitic or Chickasawan stage is shorter and more finely sculptured, though closely related."