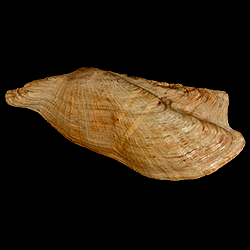 This fine species is quite variable in the development of the extended wings which suggested Professor Heilprin's name. In many specimens the posterior wing does not exceed that usual in A. occidentalis, while in others it may extend an inch beyond the rest of the shell. The anterior wing is less prominent and a little more constant, but is frequently paralleled by fossil and even by recent specimens of A. occidentalis Phil. So far as yet known, this species is confined to the Floridian Pliocene. The character of the cardinal area is similar to that of A. noae."