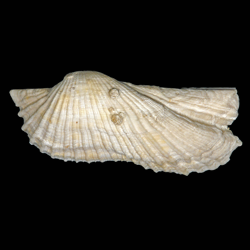 "Sub-Generic Character. Animal fixed by byssiform filaments to other bodies. Shell transverse; umbones remote; valves gaping in the middle of the ventral margin.

Specific Character. Margins angulated; valves marked with simple uniform and regular grooves, radiating from the umbones: shell transversely and obliquely striped with brown.It is somewhat surprising that the sedentary type of the genus Arca should have been so long uncharacterized in our Conchologieal Systems; seeing that the other four types, viz. Arca, Pectunculus, Cuculloea, and Nucula, were defined many years ago by the celebrated Lamarck. We have consequently supplied this omission; and at the same time have selected a species hitherto, we believe, confounded with the B. Noae; from which it differs in sculpture, colour, and in the umbones being less remote from each other.

The Animals of these shells affix themselves to other bodies by a particular muscle, which is protruded through the gaping part of the valves; they also adhere, when young, by the byssiform epidermes which covers the exterior: a specimen now before us, which we procured in the Bay of Naples, perfectly exemplifies this singular property. The present species is not uncommon in the West Indies, and has been sent to us from Jamaica. Like all others of this particular type it is almost constantly covered by coralline substances."