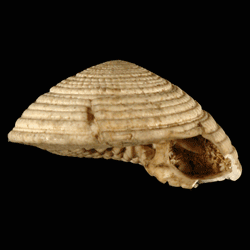 The North Carolina fossil exactly resembles the recent shell unless the granulations are slightly more prominent in the former, a character which is not constant within the species. Those from Chipola are all small specimens, but agree perfectly with the younger granulatum except in having the periphery and basal ribs conspicuously beaded. They may form a variety chipolanum."