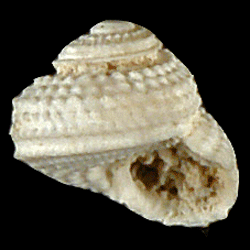 "Shell turbinate, moderately umbilicated; whorls subangular, channeled on the basal margin, ornamented with about five concentric beaded lines, the beads largest on the upper lines; base of shell flattened, indistinctly rayed, with an equal number of revolving beaded lines, the beads most prominent on the umbilical line; aperture orbicular, the border nearly continuous; umbilicus deep.

Closely resembles Solariorbis bella, of Conrad, from the Claiborne (Eocene) sands of Alabama, but the whorls in that shell are much more angular, and have two equally prominent circumferential channels instead of the single basal one seen in the Florida fossil. The generic position of the species cannot be definitely determined."