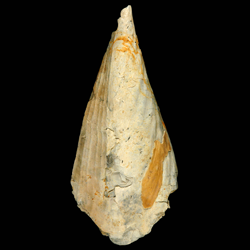 "Types collected by G. D. Harris (in honor of whom the species is named) from the Miocene at Jones's Wharf on the Patuxent River, Maryland; other specimens were found by him near Plum Point, Maryland, and a fragment at Magnolia, Duplin County, North Carolina, by Burns.

Shell rather thick (the fibrous layer lost in the specimens), ovately rounded behind, moderately convex; hinge-line straight, ventral margin slightly incurved; the surface of the pearly layer shows the dorsal region with numerous fine longitudinal elevated lines, below which the shell is at first nearly smooth, then the ventral region is sculptured with numerous close-set concentric riblets. Length of portion preserved about 150, max. width 60, diam. 32 mm.

This species appears to have been not unlike A. serrata Sowerby, but was a much heavier shell with a blunter anterior end."