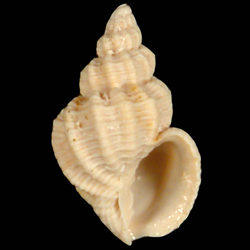 "Shell of only moderate dimensions and moderately heavy, the spire-elevated and turreted, the body tapering at the base, apparently varying widely in relative proportions. Whorls 8, 5 of them included in the conch. Protoconch imperfectly preserved in the topotype, small, smooth, and polished, naticoid in outline, thrice coiled. Initial whorl minute, rounded, for the most part submerged; succeeding volutions increasing regularly and rapidly in diameter and altitude, separated by rather deeply impressed sutures. Bounding line between conch and protoconch indicated by an irregular, retractive thickening, a change of the texture of the shell, and the initiation of the sculpture, both the axial and the spiral. Axial sculpture similar in general character over the entire surface of the conch, the axials narrow but rounded upon their summits, feebly retractive, somewhat irregular in size and spacing, the terminal rib relatively heavy, persisting with nearly uniform elevation from suture to suture and, on the body, almost to the anterior fascicle; usually 11 ribs on the later volutions. Spiral cording heavy, developed over the entire surface of the conch, the primaries normally 4 or 5 upon the later whorls of the spire and 8 or 9 on the body, those upon the base narrower and a little more closely spaced than those upon the medial portion of the body, sharply elevated, flattened upon their summits, equal in size and spacing; secondaries regularly intercalated in the squarely channeled cross-striated interspaces, and even tertiaries introduced in the widening interprimary areas upon the medial portion of the body; anterior fasciole closely threaded with 4 to 6 rounded lirae. Suture lines distinct, impressed, undulated by the costae of the preceding volution. Aperture moderately wide, lobate. Outer lip arcuate, the margin crenate in harmony with the spiral sculpture, lirate within, the lirae rather sharp, persistent almost but not quite to the margin and produced rather far within the throat, 10 not including that directly beneath the suture line nor the 2 obscure lirae at the mouth of the anterior canal. Columella smoothly excavated at the base of the body. Parietal wall heavily glazed, the callus carried across on a line with the suture and spread rather widely and heavily over the body wall, though not entirely concealing the sculpture. Columella triplicate, the posterior fold the most elevated, almost horizontal, less produced than that in front of it, which is slightly oblique; anterior fold marginal, sharply elevated, persisting with diminished strength within the aperture. Anterior canal short, twisted, nasute. Anterior fasciole arched, crescentic, the narrow umbilical area included between the fasciole and the reverted pillar, narrowly perforate.

Cancellaria bifoliata Aldrich of the Oak Grove fauna is less than half as large, the axials are narrower, more abruptly elevated, and less numerous, and the columella bears only two true folds instead of three."