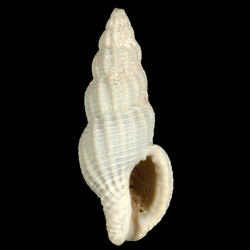 This new Phos is related to Phos parvus intricatus Dall. In that species the sculpture differs considerably; the spiral ribs are much less uniform in size. On intricatus the spiral sculpture is dominant, on P. roycei the axial the most evident. The aperture of P. parvus is roughly half the length of the shell, relatively much longer and larger than in the new species. Viewing the two upon a plane surface P. roycei shows much greater deflection at the anterior end plus a longer canal.

In making comparisons a long series of living Phos parvus intricatus obtained by Winifred Royce at Key Largo, Florida, provided material for study. The new tertiary shell is associated with his name. The holotype is to be placed in the Museum of Comparative Zoology. PL 6, fig. 7. Pliocene, Clewiston, Florida."