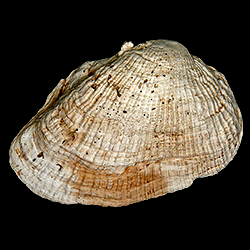 "Shell thin, elongate, irregularly distorted; beaks prosogyrate; at the anterior third rather low and compressed; cardinal area long, rather narrow, with very numerous (twelve) concentric grooves; surface irregular, sculptured with numerous fine radiating, somewhat imbricated ribs, of which those in front of the beaks and on the posterior dorsal slope tend to be larger and more elevated; there is a tendency to alternate or pair among the ribs in some specimens; the imbrications or nodules on the ribs are somewhat regularly spaced and correspond to elevated concentric lines in harmony with the lines of growth; the posterior dorsal slope is bounded by rounded ridges radiating from the beaks; the posterior cardinal margin is elevated and angular with more or less of a depression between it and the radial ridge on each side; the byssal foramen is wide and irregular; the hinge-line is long and straight; the teeth, vertical and very small medially, are sometimes obsolete in the middle of the hinge; distally they become rather distant and quite oblique, as well as larger; the internal margin, though irregular, is not fluted. Lon. of adult 51, alt. 25, diameter 20 mm.

'This species is distinguished from B. marylandica by its smaller altitude, its coarser and more prominent sculpture, and more irregular hinge; the beaks are also more anterior.' - ­Dall, 1898.