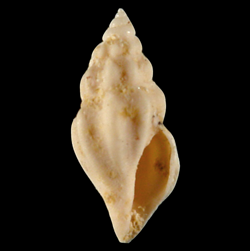 "Shell very small, stout, fusiform, the maximum diameter falling a little in front of the median horizontal; height of aperture a little less than half the total altitude; whorls of spire broadly rounded, tapering rapidly to an acute apex; body rounded, strongly and rather abruptly constricted at the base. Whorls 7.5 in all, 4 of them included in the lustrous, elevated protoconch. Initial turn of protoconch extremely minute but rounded and a little compressed laterally, immersed only at the tip, slightly tilted; the succeeding volutions of the protoconch very broadly and smoothly rounded and increasing rather rapidly in diameter; axial sculpture introduced upon the final half turn in the shape of faint protractive or slightly arcuate linear riblets, uniform in elevation from suture to suture but becoming increasingly stronger and a little more closely spaced toward the close of the protoconch. Dividing line between conch and protoconch indicated by a slight thickening and change in the texture of the shell and by the initiation of the conchal sculpture, both the axial and the spiral. Axials rather low, broadly rounded, uniform in prominence from the periphery to the anterior suture but much lower, narrower, and sharply pinched behind the periphery, persisting, however, across the fasciole to the posterior suture, 9 upon each of the later whorls of the type, including the body, which is regularly costated even upon the final half turn, the costae evanescing, however, upon the base; intercostal areas shallow, usually a little wider than the costals; incremental striae faint but sharp. Spiral sculpture crowding the entire surface of the conch, the spirals low and very fine, tending to alternate in size, microscopically granulated by the incrementals, the primaries 7 or 8 in front of the periphery of the penult, least faint and least narrow upon the pillar. Spirals upon the posterior fasciole even finer and more crowded than those in front of the periphery, a little irregular in size but without intercalated secondaries; fasciole on the spire approximately half the width of the whorl, inconspicuously defined by the obscure and oblique shouldering of the whorl and the change in the character of the sculpture, both the axial and the spiral. Sutures deeply impressed, undulated by the costae of the preceding volution. Aperture narrow, obliquely lobate, acutely angulated at the posterior commissure. Outer lip thin, sharp, broadly insinuated posteriorly, slightly expanded incrementally but not axially. Posterior sinus rather shallow, symmetrically disposed upon the fasciole. Labium smoothly excavated at the base of the body. Parietal wash thin. Pillar long, approximately straight. Anterior canal moderately long and rather wide. Anterior fasciole rather narrow, defined only by the absence of spiral sculpture upon it; extremity obliquely truncate or very widely and obscurely emarginate.

Brachycythara dasa is a stout little form similar in outline only to M. cryptopleura, a species from which it is readily separated by the less numerous axial costae, the sharper spiral lirae, and the 4-whorled instead of 2-whorled protoconch, the initial whorl of which is tilted and immersed only at the tip. This apical tilt is similar to that of “Cythara” chariessa, but the later protoconchal turns of dasa increase much more rapidly in diameter than those of chariessa."