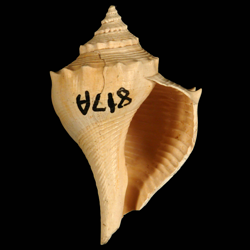 "Shell rather small for the genus, not very heavy, pyriform in outline. Spire of moderate height, tapering rather rapidly to an acute apex. Whorls approximately 7 in all, including the 2 nuclear turns; those of the conch obliquely shouldered, converging as a rule at an angle of a little more than 45°, the suture falling in front of the periphery on the later turns so that the profile of the spire is interrupted by the peripheral sculpture. Body whorl flattened medially, rather abruptly constricted into the long and slender pillar. Initial whorl of protoconch low, flattened somewhat posteriorly, immersed at the tip; succeeding whorl more elevated, broadly rounded, becoming increasingly less convex toward the close of the protoconch; axial sculpture introduced on the final half turn of the protoconch in the form of half a dozen obtuse axial riblets, least feeble on the periphery, evanescing a short distance behind it. Dividing line between the conch and protoconch indicated by the development of a peripheral keel, the concomitant evolution of the axials into narrow peripheral nodes, and the initiation of the spiral sculpture. Axial sculpture upon the conch restricted entirely to the peripheral corona and the incrementals; nodes on the early whorls broadly rounded, closely and evenly spaced, 17 or 18 to the whorl, later becoming slightly elongated and compressed horizontally, the number decreasing to 15 or 16 and on the later volutions, with the increasing prominence and acuteness of the tubercles, to 13 or even in some individuals to 10. Shoulder spirals appearing in the form of clearly defined cords subequal and subequispaced, usually 5; body sculpture absent upon the adult between the periphery and the dozen or so rather fine and not very closely spaced lirae that gird the base of the body and the pillar; threading apparently absent on the anterior fasciole. Aperture pyriform. Outer lip thin, sharp, obtusely angulated at the shoulder, broadly arched in front of it, rather abruptly constricted at the canal; inner surface sharply lirate from the posterior commissure to the entrance to the canal; lirae persistent far within the throat and almost but not quite to the outer margin, usually 4 or 5 on the inner surface of the shoulder and 15 or 16 in front of it. Inner margin of aperture smoothly excavated. Parietal wash very thin. Pillar not very heavily reinforced. Canal well differentiated, long and slender, the margins parallel and proximate; marginal fold obtuse, defined by a shallow sulcus a little behind the angle at the entrance to the canal. Anterior fasciole moderately arched, truncate at its extremity.

Busycon epispiniger is characterized by the complete emergence of the peripheral keel behind the suture line on even the earliest volutions and by the absence of spiral sculpture between the periphery and the base of the body. A few individuals of B. sicyoides Gardner approach B. epispiniger in the sharpness of axial sculpture, but in all of them the early whorls of the conch are immersed so deeply that the periphery is wholly or in part concealed. The spiral threading on the shoulder is not so well developed as in epispiniger nor are the axial nodes so rounded and so regular. The Vicksburg analog, B. spiniger Conrad, is more sharply spinose, the spiral sculpture is much finer and closer on the shoulder, and the entire surface of the body is spirally lirate except for a narrow band on the anterior medial portion. B. maximum Conrad, so prominent in the later Tertiary, is probably a representative of this same general group though not a lineal descendant.