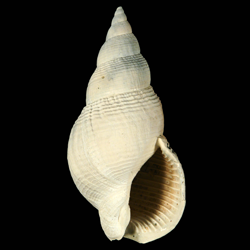 "Etymology of name. —Named in honor of Druid Wilson of the U. S. Geological Survey.

Remarks.— This, the only North American representative of Calophos, most closely resembles C. plicatilis (Bose), but is larger, and has greater variability in the expression of axial and especially spiral sculpture over the body whorl. Spiral grooves may persist uniformly over the body whorl surface (as in the specimens figured by Olsson and Petit, 1964, pi. 79, fig. 6, and by Campbell, 1974), or become obsolete over this region (as in the holotype) in typical Calophos fashion. It closely resembles C. mixteca (Perrilliat Montoya, 1963), differing in being larger, relatively wider and having a relatively shorter columella. It is similar to C. ectyphus Woodring, 1964, but is larger and more elongate and has a somewhat thinner outer lip. C. wilsoni is characterized by a combination of features including short columella with a distinctive ridge-and-fold separating it from the body whorl, relatively high spire, rounded whorl shape with very faint to obsolete axial sculpture, and relatively large size.

No specimens from Jackson Bluff, Lee County, have been examined, and the only source of information on this occurrence is Mansfield (1930). Olsson and Petit (1964. p. 552) stated that this form is "fairly common at Acline, but rare at other Pinecrest localities." Their figured specimen came from a canal in Dade County. I have also examined specimens referable to C. wilsoni collected by E. J. Petuch at the "Bird Road Site" in Miami (see Petuch, 1986) from beds apparently equivalent to the "Pinecrest" beds at Sarasota. Among the many molluscan species they discuss, Olsson and Petit (1964, p. 517) single out this gastropod as being of particular interest, presumably because it so strongly indicates affinities with Caribbean and Central and South American faunas. Although the stratigraphic relations and nomenclatural status of the "Pinecrest" and the associated Caloosahatchee Formation remain unresolved (see Missimer, 1984, and Stanley, 1986, for summaries), a Pliocene date for the "Pinecrest" is well supported (e.g.. Akers, 1974)."