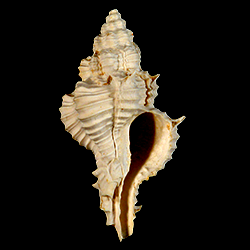 "Shell large and heavy, for the group; fusiform. Aperture about half as long as the entire shell. Whorls of conch probably 8 or 9, regularly increasing in diameter, the early volutions obscurely shouldered, the outline of the later volutions largely determined by the broad and prominent costals. Body whorl inflated, very abruptly constricted into the slender pillar. Sutures inconspicuous, evenly undulated by the costals of the preceding volution. Protoconch like that of Paziella (Dallimurex) lychnia, small, smooth, twice-coiled, the initial turn inflated, immersed at the tip, the succeeding whorl well-rounded, flattening toward its close; dividing line between conch and protoconch indicated by a narrow riblike thickening of the shell and by the initiation of the sculpture. Axials on the early volutions narrow but smoothly rounded, feebly retractive, 6 or 7 in number, equisized and equispaced, uniform in elevation from the periphery to the anterior suture but dying out on the ill-defined shoulder; outer margin of the shoulder coronated with short, sharp spines formed by the intersection of the axials with the peripheral spiral. Axials on the later volutions prominent, broadly rounded, varicose but undulatory in character, disappearing rather abruptly a little in front of the posterior suture, thus forming an obscure shoulder; axials persisting, however, to the anterior suture and well down to the base of the body and appearing on the pillar as closely appressed, overlapping folds; component laminae of the varices occasionally free, visible only on the apertural side of the varix and only on the later volutions; sharply frilled by the spirals but not produced into spines except on the shoulder and the medial portion of the pillar; intervarical areas concave and of approximately the same width as the varices. Spiral threading sharp; lirae narrow, elevated, angular, the primaries 3 in number on the early whorls, 4 or 5 on the penultima and antepenultima, and 7 to 9 on the body exclusive of the pillar, separated by flattened interspaces approximately double the width of the spirals; posterior primary outlining the periphery and forming the midrib of the short, varical spines; 1 or, on the later whorls, 2 threadlets intercalated between the periphery and the suture line and undulated in harmony with the suture; a secondary regularly intercalated between the peripheral spiral and the spiral next in front of it; 1 or 2 finer spirals at the extreme base of the body; pillar girded with 3 simple primaries, a series of short spines one to each varix parallel to the primaries, and 1 or 2 irregular spirals in front of the spines. Anterior fasciole sharply rounded, laminated by the extremities of the varices, not spirally threaded. Aperture spatulate, oblique, broadest posteriorly, not sulcated at the posterior commissure. Outer lip arcuate, varicated behind the margin, thin and sharply crenate at the margin in harmony with the spirals, lirate within, the lirae usually short and corresponding in position to the interprimary areas. Inner wall of aperture excavated at the base of the body, smoothly and heavily glazed. Pillar moderately long and straight, corrugated just behind the entrance to the canal, with 3 to 6 lirations at right angles to the axis. Anterior canal long and slender, the margins proximate and parallel. Anterior fasciole diverging slightly, leaving a narrow, umbilical chink between the fasciole and the inner margin of the canal.

Paziella (Dallimurex) fusinoides is well characterized by its conspicuously fusiform outline. The costals are as broad as the intercostals and broadly rounded on their summits, though their muricoid character is indicated in the free edges, which are crenulate in harmony with the spiral sculpture and are visible only on the apertural face of the varix."