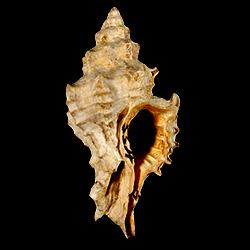 "Shell of moderate dimensions for the group, rather slender, fusiform, hexagonal. Aperture decidedly more than half as long as the entire shell. Spire elevated, scalar; the rapidly tapering whorls acutely angulated at the periphery; the broad shoulder ramp not far from horizontal, undulated by the varices and slightly concave at the varical spines; the sides of the whorls nearly vertical. Body whorl rounded medially, obliquely constricted into the rather slender pillar. Number of whorls at least 6 and possibly 7 in the perfect adult; coiling very close, the posterior margin creeping up a little on the preceding whorl. Sutures inconspicuous, irregular. Protoconch small, smooth, polished, twice coiled, the initial turn inflated, immersed at the tip, the succeeding volution also well-rounded though flattening somewhat toward its close. Dividing line between conch and protoconch indicated by a slight thickening of the shell and by the abrupt initiation of the axial sculpture. Varices 6, equisized and equispaced, terminating at the peripheral angle in a slender spine curved upward and backward; a single row of spines also girding the pillar; free edges of varical lamellae on the body fluted by the primaries; intervarical areas smoothly concave; varices obsolete on the shoulder except for the closely appressed, overlapping, retractive laminae. Spiral sculpture restricted to low, rounded, equisized and equispaced lirations, 2 or 3 on the whorls of the spire, the posterior liration outlining the periphery, the anterior almost or entirely concealed by the suture, the medial midway between the suture and the periphery; spirals 6 to 8 on the body, even and regular from the periphery to the base; secondaries not intercalated; sculpture on the pillar restricted to the single row of varical spines, without a connecting spiral, girding the pillar midway between the base of the body and the anterior fascicle. Fasciole corrugated by heavy, overlapping lamellae, one, to each varix. Aperture narrowly elliptical, exclusive of the canal, which is a little less than half as long as the entire opening; aperture obscurely sulcated at the commissure, emarginate at the periphery. Labrum broadly arcuate in front of the periphery, varicated a little behind the margin, finely crenate at the margin in harmony with the spiral sculpture, lirate within; the lirae corresponding roughly in position to the interspiral areas, tending to alternate in length, the longer of the lirations produced far within the aperture. Labium concave, smoothly and heavily glazed, the margin detached from the pillar wall. Anterior cartel compressed, with narrow, proximate margins. Anterior fascicle well differentiated, emarginate at its extremity, flaring away from the labial margin, leaving a narrow, cuneate umbilical opening.

The spire of Paziella (Dallimurex), with its smooth shoulder almost at right angles to the sides and crowned at the periphery by the upcurved spines, is suggestive of a candelabrum. The species may be the descendant of the smaller and more slender "Muricopsis" heilprini Cossmann, from the Tampa silex beds. There is no very closely allied coexistent species. Muricopsis laccopoia to which it bears a superficial resemblance, is rather conspicuously biconic. The axial varices are continuous and strongly retractive forming a series of small pockets on the shoulder ramp directly in front of the suture and to the right of the varix, and one or two spiral lirations are intercalated between the periphery and the posterior suture. The shoulder of M. lychnia is devoid of spiral sculpture and the axials are for the most part obsolete."