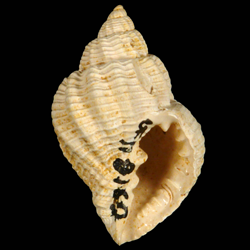 "Shell of moderate dimensions for the genus, not very stout nor heavy; spire relatively high, scalariform; body inclined to be flattened laterally, though abruptly constricted at the base. Protoconch thrice coiled like that of C. paramoorei, highly polished, smooth, and naticoid in outline; initial turn minute, almost entirely submerged; the succeeding volutions broadly and smoothly rounded, increasing regularly in diameter and altitude. Boundary between conch and protoconch very sharply defined by the change in the texture of the shell and by the abrupt initiation of the axial sculpture and of 4 low, flattened spirals equal in size and regular in spacing. Whorls of conch 5.5 in the type, the later volutions narrowly tabulated. Sculpture of conch sharply reticulate, the axial dominant. Axials narrow, acute, especially upon the later turns, retractive, approximately though not entirely equal in size and regular in spacing, 15 upon the penult of the type and 17 upon the body, including the terminal varicose rib; costae uniform in elevation upon the sides of the whorl and well down to the base of the body, though evanescing upon the horizontal tabulation and upon the depression at the base of the body; intercostal areas shallow, wider than the costals. Spiral sculpture of low, flattened fillets, equally prominent upon the axial and interaxial areas, usually 5 upon the penult and twice as many upon the body, the second and third spirals from the posterior suture a little more prominent and a little more distantly spaced than those in front of them; posterior spiral the last to be introduced and consequently inclined to be a little less elevated than the others, especially in immature individuals; a feeble secondary usually intercalated upon the shoulder between the posterior fillet and the posterior suture and also in the wide interspace upon the body between the second and third spirals; basal spirals slightly narrower than those upon the medial portion of the body. Anterior fasciole cut off from the base of the body by a broad and rather shallow depression outlined medially by a band a little narrower than those upon the base of the body; 3 coarse and not very sharply defined fillets developed upon the crest of the anterior fasciole. Suture line distinct, impressed, finely crenulated by the costae of the preceding volution. Aperture lobate, obtusely angulated posteriorly, the outline rather obscured by the armature. Outer lip subvaricose, broadly arcuate, reinforced within by 7 denticles elongated transversely to the margin, becoming increasingly more prominent and more distantly spaced posteriorly; an amorphous deposit of callus also laid down directly in front of the suture. Excavation at the base of the body very sharp. Parietal wash thin, not sufficient to obliterate the sculpture. Columella straight, strongly plicate, the posterior fold the most elevated and the most nearly horizontal; medial fold parallel to it internally but flexed at the entrance to the aperture to parallel the marginal fold, which probably persists for only a short distance within; a small, well-rounded tubercle developed upon the pillar between the extremities of the posterior and medial folds. Anterior extremity of aperture compressed into a short, narrow, and somewhat nasute canal. Umbilicus narrowly perforate; a crescentic umbilical funnel included between the reverted labial margin and the strongly arched anterior fasciole.

Cancellaria aldrichi is closely allied to the congenetic C. paramoorei. C. aldrichi is not so stout, however, as C. paramoorei, the sides of the whorls are more flattened, the spire consequently more scalariform, the axials are sharper and more numerous on the later volutions, the spirals lower, more straplike, and usually more numerous by 1 or 2 upon the whorls of the spire, and the inner surface of the labrum is strengthened by 7 denticles instead of 10 or 11 lirae produced far within the throat.

Cancellaria aldrichi takes its name from the collector, Truman H. Aldrich, who has so greatly advanced the knowledge of the early Tertiary faunas of the Gulf both by his extensive collections and by his publishedobservations upon them."