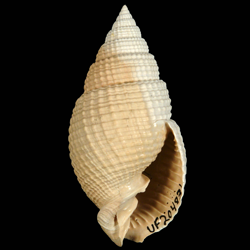 "This shell differs from the common and well-known C. reticulata Linne of the recent fauna of the Gulf of Mexico in the following particulars: It is much more slender: a specimen 38.0 mm. long has a maximum width of 19.0 mm. A specimen of C. reticulata 38.0 mm. long has a maximum width of 23.0 mm. In C. Conradiana the aperture is half the total length; in C. reticulata the aperture is five-eighths as long as the whole shell. The sculpture is essentially the same in both, and passes through the same range of variations. The suture is less marked in the fossil than in the recent shell. In both there is a slender elevated thread on the body, hardly visible at the aperture; there are also two much elevated, revolving plaits on the pillar and the anterior edge of the pillar is sharp and prominent. Except that on the body, these ridges have a tendency to become double-edged by the development of a secondary cord or ridge on their anterior faces. In the fossil, on the average, these folds are less thick and less double than in the recent shell, while the columella and its fasciole are narrower, weaker, and with a smaller umbilical chink.