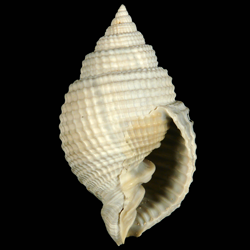 "Shell rather small, broadly ovate. Nucleus decollate, the post-nuclear whorls moderately convex, the body whorl globose, shouldered near the summit. Sculpture reticulate, consisting, on the body whorl, of 14 or so low flat spiral ribs crossed by about 28 higher and comewhat narrower axial ribs, the intersections nodular. Columella with three strong plaits, the upper or posterior one much the larger, the upper and middle ones subparallel and nearly horizontal, both with a growth of callus on their undersides, the lowest plait the smallest and oblique. Above the posterior shelflike plait, the columella is deeply excavated. On the parietal wall above the excavated area there is a prominent, irregularly thickened, rounded, Distorsio-like ridge which extends well within the aperture but merges, at the labium, with the ninth spiral rib down from the summit. It is the position and prominence of this ridge that serves to differentiate this shell from C. reticulata (Linnaeus) and its numerous congeners.