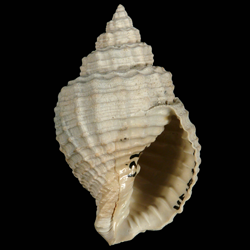 "General Characters. — Shell rather large and heavy, conspicuously scalariform. Aperture a little more than half as high as the entire shell. Conchal volutions 5 in number, widely tabulated, the whorls of the spire flattened laterally, the body broadly rounded and abruptly constricted at the base. Suture distinct, feebly impressed, undulated by the costal of the preceding volution.

Protoconch. — Protoconch rather small, smooth, thrice-coiled, the component whorls increasingly rapidly in diameter, altitude, and degree of inflation. Dividing line between conch and protoconch indicated by the abrupt initiation of the axial sculpture.

Sculpture. — Whorls of conch latticed. Axial sculpture of narrow, rounded, elevated ribs, irregularly spaced and, on the ultimar and penultimar whorls, varying from 16 to 26 in number; costals of spire continuous from suture to suture, strongly retractive on the shoulder, weakening perceptibly posteriorly; on the ultima, persisting with diminishing strength well down on to the pillar; incrementals well developed. Spiral sculpture often more prominent than the axial; lirations flat topped, well elevated threads, separated by interspaces a little wider than the lirae and just about equal to the intercostal areas; the spirals overiding the costae at their intersection, producing a series of elevations which would appear granular in a more closely sculptured shell; normal number of primaries on the sides of the whorls of the spire, 3; on the body and pillar, 8 to 10; anterior primary of each volution following the peripheral angle; angle rounded off on the final half turn and, at the aperture, almost or altogether obsolete; a single secondary occurring midway between the periphery and the suture; other secondaries intercalated upon the body whorl; anterior fasciole threaded with 3 or 4 subequal, closely spaced lirae.

Aperture. — Aperture rather narrow for the group, oblique. Outer lip arcuate, lirate within; lirae approximately 9 in number, corresponding in position to the secondaries on the body whorl. Columella quite strongly excavated at the base of the body. Parietal wash not sufficiently heavy to conceal the basal sculpture. Pillar quite long and straight. Columellar plications narrow, oblique, sub-parallel and almost equally spaced, increasing rapidly in prominence from the anterior to the posterior; anterior fold marginal.

Observations. — Cancellaria tabulata is separated from the later but closely allied Cancellaria conradiana Dall by the lower spire, the stouter body whorl, the much wider, much more sharply defined shoulder, and the more loosely reticulated sculpture.