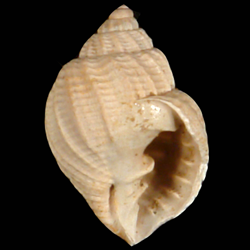 "Shell of moderate size for the genus, subovate in outline. Spire rather low, scalariform; whorls obtusely tabulated, increasing rapidly in diameter; sides of the whorl, including the body, flattened, the body abruptly constricted at the base. Whorls of the conch 4, the protoconch coiled 3.5 times, nearly smooth and highly polished in perfectly fresh individuals; initial turn of protoconch minute, somewhat inflated, almost entirely submerged; succeeding volutions increasingly elevated; exceedingly faint and obscure spiral lirae introduced upon the final half turn, continued across upon the conch as low but sharply defined spiral fillets. Line of demarcation between the conch and protoconch indicated by a change in the texture of the shell, the contour of the whorl, and the introduction of the well defined spiral and axial sculpture. Axial sculpture somewhat irregular over the entire shell, suggesting a very strong and slightly modified incremental sculpture. Costae acute upon their summits, feebly retractive or flexuous, 12 on each of the later whorls of the type, including the body, separated by wider, feebly concave intercostal areas. Spiral sculpture of low, flattened, straplike fillets overriding the costals, approximately equal and regularly spaced in front of the periphery, 3 or 4 upon the penult, not counting the peripheral fillet, and about twice as many upon the body between the periphery and the pillar; peripheral spiral usually a little wider than those in front of it and isolated by a relatively wide interspiral; interspirals for the most part only a little wider than the spirals except upon the base of the body, where they are fully twice as wide; fortuitous secondaries introduced in places; shoulder spirals usually 3, increasingly stronger toward the periphery, the anterior of the shoulder spirals commonly almost as prominent as the peripheral; pillar and anterior fasciole similarly threaded with 6 to 9 low, flat, rather ill-defined rugose spirals. Incrementals for the most part microscopically fine, taking the same direction as the axials. Suture line distinct, impressed. Aperture decidedly more than half as high as the entire shell, moderately wide. Outer lip thin edged, obtusely angulated at the shoulder, broadly arcuate, lirate within, the 7 lirae very sharply defined both vertically and horizontally, increasingly less elevated and less produced anteriorly, not persistent to the outer edge. Inner margin of aperture abruptly constricted basally. Parietal wash very thin, not sufficient to conceal the body sculpture. Pillar heavily plicate, the posterior fold strongly and sharply elevated, approximately horizontal, not carried to the margin of the wash; medial fold oblique, not quite so prominent but more produced than that behind it; anterior fold marginal, the least elevated of the 3, produced externally as far as that behind it but evanescent within the aperture after a little more than a single turn; 1 or 2 irregular denticles commonly developed between the posterior and medial folds. Anterior extremity fashioned into an incipient canal. Umbilical chink not entirely closed, as a rule, by the reverted pillar lip.

Cancellaria waltoniana is one of the most prolific of the Shoal River univalves. The young are stouter relatively than the adults, but the adults are rather uniform in outline. The axials have a moderate range of variation in number and character. The spirals in front of the periphery may run up to 6 upon the penult and to 12 or 13 upon the body, but the straplike character is constant."