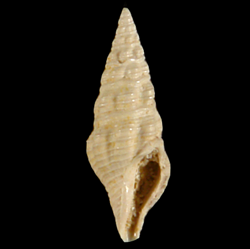 "Shell small, slender, acutely tapering, constriction at the base of the body rather abrupt. Whorls of adult conch probably 8. Protoconch small, smooth, and highly polished, coiled 3.5 times; initial whorl of protoconch coiled in a single plane and for the most part submerged, succeeding volution increasing rapidly in altitude; the final turns increasing regularly and rather rapidly both in diameter and elevation. Boundary line between the conch and protoconch indicated by the thickening and change in the texture of the shell, the initiation of the axial sculpture, and the appression of the posterior margin of the whorl; costals on the first whorl of the conch so broadly rounded in proportion to their length that they have the aspect of somewhat elongated peripheral nodes, 10 on the first whorl but reduced to 8 upon the second; 2 feeble spirals introduced within the first half turn, one near the medial horizontal and the other halfway between that and the anterior suture; a third primary introduced directly behind the suture line upon the third turn of the conch; posterior fasciole developed between the posterior cord and the posterior primary, gradually increasing in width and, on the third volution, showing traces of a faint spiral lineation; adult sculpture unusually well characterized. Axials 6 or 7 upon the later volutions, prominently elevated and very broadly rounded, separated by narrower concave intercostals, opposite and slightly protractive, so that the series performs a little less than half a revolution around the axis of the shell; most prominent medially but persistent to the anterior suture, evanescent posteriorly but sufficiently strong to undulate the fasciole feebly. Primary spiral sculpture of rather narrow, conspicuously elevated cords, 3 upon the later whorls of the spire, symmetrically disposed between the anterior margin of the fasciole and the anterior suture, the 3 primaries upon the anterior and medial portions of the body supplemented by 5 slightly less elevated cords upon the base, 5 lirae upon the pillar, and 3 or 4 very fine threadlets upon the anterior fasciole; very fine, fortuitous secondaries in some shells introduced upon the medial and basal portions of the body and upon the pillar; posterior cord defined on the first whorl of the conch and attaining an equal or greater elevation than any of the primaries, broadly and smoothly undulated by the costae of the preceding volution. Posterior fasciole gradually developed between the posterior cord and the peripheral primary; on the later volutions, one-third as high as the entire whorl, strongly undulated by the costae of the same volution and feebly by the costae of the preceding, lirated by 5 rather sharp threadlets, the 2 anterior a little stronger and not quite so closely spaced as those behind them. Suture line impressed, broadly undulated, the margin in front of it obliquely sloping to the summit of the posterior cord. Aperture narrowly clavate, widening behind by reason of the expansion of the outer lip and the rather abrupt constriction of the inner. Labrum broadly arcuate, not varicose in the immature type, smooth within. Parietal wall glazed, the callus localized directly in front of the posterior commissure. Posterior siphonal notch very deep, symmetrically U-shaped, placed a little nearer to the posterior cord than to the periphery. Anterior canal of moderate length for the genus, rather narrow, open, very slightly recurved. Anterior fasciole short, broadly emarginate at its extremity.