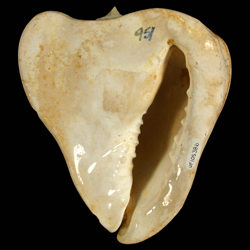 "Adult shell solid, inflated dorsally, the outline of the apertural face triangular. Surface glaze worn through over much of the shell but persisting on the callus and the flattened outer lip. Seven whorls, not including the missing nuclear and possibly the earlier postnuclear whorls. Upper surface sculptured with axial wrinkles about as wide as their intervals, disappearing at the shoulder of the whorls, which bear a series of solid flattened, unequal peripheral tubercules; the conspicuous dorsal one is somewhat abraded in the holotype. Two lesser, obscure bands of nodules, about ten mm. wide, run parallel to the carina, on the midpart of the body-whorl, dividing it into three subequal parts; anteriorly there are about five obscure spiral cords adjacent to the anterior canal. The suture is unusually irregular, following at certain stages the periphery of the preceding whorl, and at other stages, even on the apical whorls, it is pushed back of the periphery. The spire is short, low, with a wide apical angle. The aperture is narrow. Outer lip much thickened along its entire length by the terminal varix, and produced posteriorly, bearing, along its inner surface, a series of eight ridges equidistant from one another. The inner lip bears ten long, narrow teeth of which six run to the inner margin, as well as two denticles at the posterior notch, and flares to form part of the apertural shield. This shield is so alate as to form an equilateral triangle when both lips of the aperture are considered. This hatchet-shaped alation is so produced that it hides the entire body whorl when the shell is viewed from a ventral aspect. The penultimate varix has its outer margin extended to the lip of the alation of the terminal varix where the two varices are fused together. The alation is much thickened at its posterior end and fills the area between the shield and the previous varix. This shelly material covers the shoulder of the previous whorl. In an apical view the shell has a triangular outline. The posterior extremity of the aperture is obscurely notched. The anterior channel is deep, tortuous, and forms a pronounced recurved canal similar to that of Cassis tuberosa L. The columella is twisted at its lower end and bent back on itself at the point where it joins the anterior canal. There is both a false and a true umbilicus, the latter being only a slight chink. Periostracum and operculum unknown.

Type locality: The bank of Ten Mile Creek on the east side of the bridge of Florida highway No. 84, 4.7 miles north of Clarksville, Calhoun Co., Florida, Chipola formation.

Remarks. Two adult and two juveniles were found. The unbroken adult is very mature and younger shells might not possess the heavy callosity described in this paper. This species is very close to Cassis sulcifer Sby. of the Cercado and Gurabo formations of Santo Domingo and the Gatwn formation of Costa Rica. Cassis delta is much larger than any C. sulcifer recorded. The inner lip of C. sulcifer has 16 well developed lirae while C. delta has only 10 feeble teeth and 2 denticles. On the outer lip C. sulcifer has 10 well developed teeth running laterally across the ventral surface of the shield. C. delta has eight ridges in the adult, which do not extend to the exterior of the shield. Compared with C. tuberosa L. we find that the shield is quite different. In C. tuberosa the alation is quite attenuated while in C. delta it is ample. The teeth on the outer margin of C. tuberosa are well developed, extending well across the margin, and on the lower lip are long, tapering, and numerous, while in C. delta the corresponding ridges are more feeble. On the outer lip they extend only a short way across the enameled surface while on the inner lip they number only half those of C. tuberosa. The axial wrinkles of tuberosa are much finer and less prominent, and irregular spirals cover most of the apical surface. C. delta does not resemble C. flammea L. as closely as it does C. sulcifer or C. tuberosa, the most outstanding difference being the shape of the apertural shield. C. flammea has an ovate shield while that of C. delta is triangular to hatchet-shaped. When set on its apex C. flammea leans to the left and the holotype of C. delta sits upright."