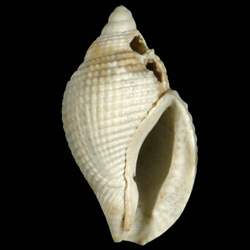 "Miocene of the Cape Fear River, Johnson; one fragment from Mrs. Guion's marl-bed, another from Purdy's; also at Natural Well, Duplin Co., Burns.

Shell small, not heavy, subfusiform, with a rather short, pointed spire and about seven whorls; nucleus of two and a quarter smooth whorls, apex moderately pointed, whorls rapidly enlarging beyond it; spiral sculpture of about five revolving, strap-like elevated bands on the earlier whorls, with wider interspaces, especially that next the suture; later whorls show an intercalary fine thread in each interspace; the spirals pass over more obscure transverse riblets, of about their own width, which ripple them, and on the last whorl and a half give rise to squarish little-elevated nodules at the intersections; the incremental lines are distinct, and the sculpture is practically uniform over the whole shell; most of the shell is comprised in the last whorl, and the aperture is longer than half the shell; outer lip gently arched, and in the adult somewhat varicose behind the margin; suture very distinct, not channelled; aperture rather narrow, canal short and wide; outer lip simple, with a row of denticles within behind the edge, but no lirae in the throat; body with a thin, smooth callus; pillar short, obliquely truncate, with an obscure anterior plait and siphonal fasciole. Lon. of shell 18; of aperture 11; max. lat. of shell 9 mm.

A number of specimens have been examined which appear fairly uniform in size and character. It is smaller and more globose than the typical species, of which only one last whorl, wanting the spire, is known. This is in the collection of the Academy of Sciences, Philadelphia."