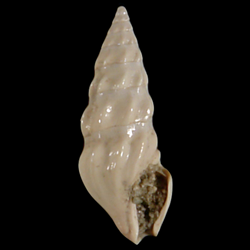 "Shell large, rather slender; spire elevated but slightly interrupted at the sutures, acutely tapering; body whorl rather abruptly constricted into the slender pillar. Whorls 10 to 11, the first 2 included in the protoconch, which is smooth and shining and rather obtuse. Initial whorl for the most part submerged, the succeeding volution large and broadly inflated at its beginning, flattening and slightly decreasing in size toward its end. Dividing line between conch and protoconch indicated by a slight thickening of the shell and the introduction of the axial sculpture. Axials similar in general character over the entire surface of the conch, narrow but rounded upon their summits, persistent from suture to suture and almost to the anterior fasciole, though weakening posteriorly and upon the base of the body and the final half turn, 11 upon the penultima of the type, feebly protractive and for the most part opposite, inclined to be slightly flexed at the posterior fasciole, separated by slightly wider concave intercostals. Spiral sculpture absent altogether, even upon the anterior fasciole. Posterior fasciole indicated only by the feeble flexure of the costals and the slightly greater depression of the intercostals; posterior margin of whorl very closely appressed. Sutures inconspicuous. Aperture clavate. Outer lip little or not at all thickened, although there is usually a rather broad varix developed within the final half turn; edge of outer lip thin and sharp and very slightly incurved, broadly and deeply insinuated at the posterior fasciole. Inner wall of aperture smoothly excavated, heavily glazed, the callus being especially thick directly in front of the posterior com missure. Anterior canal moderately long, broad, and open. Anterior fasciole clearly defined by the raised posterior margin and by the incremental corrugations, rather short and obscurely emarginate at the extremity.

This is possibly the form that has appeared in the check lists under the name Drillia lunata Lea. Perhaps the most obvious of the many differences between the two shells is the persistence of the axial sculpture of “D.” prion to the posterior suture. The species suggests “Drillia” lunata, however, in the range of variation in outline and in the number of costals. The individuals from Alum Bluff are constantly stouter than those from the Chipola River, and it is probable that more perfect material may warrant their separation. The type is larger than most of the forms and more closely sculptured. Commonly 9 rather than 11 ribs are developed upon the penult. Both the Shoal River and the Oak Grove analogs, Eumetadrillia rabdotacona and E. dodona, are relatively stouter. The axial costae are also more acute in the Chipola species than in either of the others and more uniform in prominence throughout their extent, being less expanded in front of the periphery and less prone to evanesce behind it. “Drillia” prion paraprion is usually more slender and is feebly sculptured spirally.

“D.” prion is not rare along the Chipola River, and at Alum Bluff it is one of the most common representatives of the family."