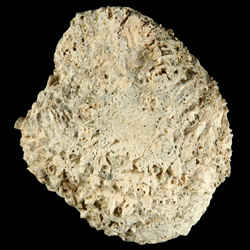 Shell irregular in shape, but usually rounded, with the lower valve deep and the upper one nearly flat, with a rotation of nearly two whorls in old specimens; sculpture of the attached valve (usually the left but sometimes the right) low, irregular, concentric lamellae and rounded radial ridges, which become on the lamellae short channelled spines; the radials vary in size but are usually close-set; the free valve has the concentric sculpture more or less suppressed, the radials finer and more regular, hardly spinose; there are frequently radials on which the spines are better developed set at regular intervals, the intervening radials without spines; the adductor scars are rather short and rounded; there is a polished, smooth border between the pallial line and the margin, the latter being finely radially grooved or striate. The shell is commonly an inch in diameter but reaches twice or thrice that size in senile individuals, judging from fragments obtained.

Two small valves are figured, since the older valves are invariably worn and do not show the sculpture well."