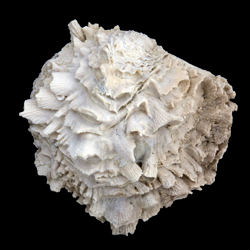 Shell large, solid, lamellose, normal or attached by the left valve; beaks prosogyrate, their coil forming about two turns; both valves with a strong furrow extending from the beaks to the lower posterior margin, but more or less obscured by the lamellation; both valves similarly sculptured with numerous, close-set, arched lamellae more or less fimbriated, sharply, closely, radially grooved on the upper surface, and for the most part distally appressed towards the valve, especially on the fixed valve, the under surfaces concave or spoon-shaped; general form irregular; the specimen figured is more transverse than usual; hinge normal, the teeth not very prominent; ligament and resilium coherent, equally long, extending into a deep groove below the broad surface of attachment; visceral area of the valves smooth with a marginal smooth border; the outer edge is minutely granular, outside of which is a more or less irregularly radiately striate or granular margin to the edge of the valves; adductor scars well marked. Lon. of figured specimen 83, alt. 68, diam. about 45 mm.

This fine species recalls C. macerophylla, but differs in the posterior furrow, the radially grooved and appressed lamellae, and apparently in being larger when adult. It was found at Shell Creek, where it was not very rare, and sparsely on the Caloosahatchie near the site of old Fort Denmead, at a point called Fourmile Hammock."