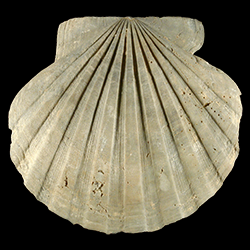 "Subequivalve, with from nine to eleven striated ribs.

Description. Shell rounded, convex, not quite equivalved, one of the valves being a little more convex than the other; the whole surface covered with approximate, scaly striae: ribs elevated, rounded, with six or seven striae on the back of each; intervening grooves profound: ears equal; sinus of the ear of the superior valve, not profound, being barely one eighth part of the length of the ear: within with broad rounded flattened ribs.

Specimens of this truly fine shell are not uncommon. The Academy has been long in possession of several single valves, in an excellent state of preservation, obtained by my friend Mr. J. Gilliams, and others which were presented by Mr. Watson, who purchased them at the sale of the collection of the late Professor Barton. Mr. Finch has succeeded in obtaining entire specimens of the two valves of the same individual. I am of the opinion that Lister's plate 167, is intended to represent this shell, and that the singular appearance of the marginal striae in that figure is a deviation from the ordinary formation of the species, and is owing to the dislocation of the lines of increment, and obliteration of the longitudinal striae. Lister describes his specimens to be of a "blue-clay colour," in this respect perfectly corresponding with two specimens before me.

On one of the specimens is an imperfect Astrea."