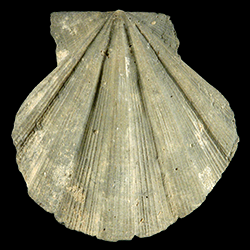 "Shell convex, suborbicular: auricles subequal: surface with numerous slightly scaly striae, and about seven remote ribs, of which the three intermediate ones are much elevated, rounded, or slightly flattened on the top.

But a single imperfect, inferior valve, occurs in Mr. Finch's collection; but this is so perfectly distinct from any other that I have seen described, that I have no hesitation to describe it as new. The striae are equally distinct on the ribs, and in the intermediate spaces. The scales are rather thick, very small, and not confined to the striae, but are also observable in the spaces between the striae."