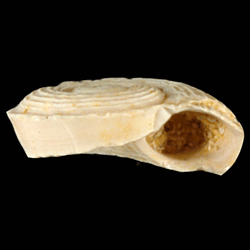 "Shell minute, subdiscoidal. Nucleus relatively large, smooth, apparently of 3 turns, the whorls erect and increasing in size with uniform rapidity. Whorls of conch apparently only 2, more rapidly increasing in size than those of the protoconch, closely appressed, bicarinate at the periphery, flattened or broadly concave in front of the suture in the adult, horizontally tabulated in the young, flattened on the base. Spiral sculpture abruptly initiated at the beginning of the conch, the spirals increasing in number by intercalations at the suture line; primaries 7 or 8 in number behind the periphery of the adult, including the slightly more elevated thread that outlines and emphasizes the posterior keel. Shoulder depression broadly and evenly concave, occupying a little less than half the space between the suture and the periphery; threaded with 4 to 7 subequal secondaries. Space between the anterior and posterior keels flattened, only a little narrower than the sculptured portion of the base; threaded with 6 or 7 microscopically fine lirae. Sutures inconspicuous, creeping up a little on the preceding whorl. Base flattened in front of the posterior carina, smooth or obscurely striate except on the final half turn, where it is sculptured with 6 or 7 equal and equispaced primaries, the posterior of which outlines the peripheral, the anterior the umbilical keel. Funnel broad and deep, persistent to the apex; smooth or finely lirate. Aperture subcircular or rounded-trigonal, oblique to the axis of the shell, obtusely angulated at the carinae. Peristome continuous, adnate to the body wall from a point a little behind the posterior keel to one a little in front of the anterior carina. Outer lip expanded. Inner lip excavated but not thickened.

"Circulus" anthera is closely allied to "C." mitorraphes, and it may be possible, with the aid of further material to establish a connecting series. The former species suggests a "C." mitorraphes that has developed double peripheral keels, separated by a rather wide, flattened area; a flattened base, and a broad tabulation or depression in front of the shoulder. It also suggests a "Circulus" trilix in which the sculpture on the apical surface is obsolete except for the primaries that outline the carinae.

The adolescent forms are so distinct that they were at first mistaken for another race. They are similar to "C." trilix but are spirally threaded in front of the shoulder of the final whorl of the spire and have a second sharply elevated spiral revolving directly in front of that which outlines the shoulder."