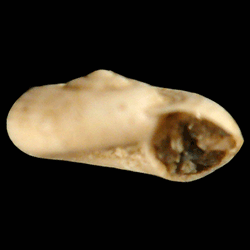 Remarks - The longitudinal striae are so minute as to escape observation, unless assisted by a powerful microscope. They do not cross the ribs. The mouth is smooth within, and almost exactly round, except at its junction with the preceeding whorl, where there is a small channel.

This shell bears some resemblance to the Turbo lineatus, Lea, but is separated from that shell by its entire mouth, larger umbilicus, &c.

I have felt some doubt in placing this and two or three of the following shells in the genus Delphinula. Their general appearance would seem rather to make the approach the Turbo, but their entire mouths constitute them true Delphinulae. The genus Skenea, Fleming, seems well fitted to receive them, but it is described as having the 'aperture dilated,' a character which is wanting in the shells at present under consideration."