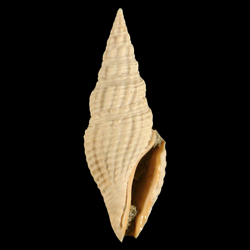 "Shell rather small, slender, biconic, tapering gradually toward either extremity; length of aperture more than half the entire altitude. Whorls of the conch 6%. Protoconch thrice coiled, buccinoid in outline, polished, smooth; initial turn for the most part submerged, succeeding volutions very feebly inflated, becoming increasingly higher and more flattened laterally; beginning of conch marked by a slight thickening and change in the texture of the shell, the increasing posterior appression, and the introduction of very faint axial riblets broadly rounded upon their summits, evanescent posteriorly, 10 on the earlier whorls; spiral sculpture faintly discernible a little behind the middle of the second whorl of the conch, the spirals gradually increasing in number and prominence. Adult whorls feebly inflated medially, closely appressed posteriorly. Posterior fasciole very obscure. Axials narrower, less obtuse, and more numerous upon the later whorls than upon the earlier, 14 upon the penult, evanescent posteriorly and on the final half turn less prominent, crowded and irregular but uniform in strength from the fasciole to the anterior suture and well down to the base of the body whorl, opposite and slightly protractive, the series performing a little less than half a revolution around the axis of the shell. Spiral sculpture dominating the axial upon the later volutions; spirals low and broad, overrunning the costals, separated by linear channels except for the posterior channel, which is slightly wider than those in front of it; fillets 3 upon the later whorls of the spire, 12 upon the body, with an additional sharp thread and a narrow cord behind it at the anterior margin of the obscure posterior fasciole. Axial sculpture obsolete upon the fasciole except for the rather strong incrementals; posterior cord prominent, undulated, and feebly nodulated by the costae of the preceding whorl. Suture line wavy, very closely appressed. Aperture narrow, somewhat oblique, slightly wider posteriorly by reason of the constriction at the base of the body. Outer lip oblique, with an almost imperceptible medial expansion, subvaricose near the margin, simple within. Labium thickened, reverted. Posterior siphonal fasciole very broad and shallow, symmetrically disposed between the shoulder and the suture. Anterior canal broad, the anterior fasciole very finely lirate, broadly emarginate at its extremity.

Clavatula apoia is smaller than other members of the group; the posterior fasciole is less strongly defined and the spiral sculpture is more prominent. C. grabaui Maury has much the same general contour and the same vague definition of the posterior fasciole, but it is much larger, the axials are more numerous, the spirals are very much finer, and there are twice as many of them upon the later whorls of the spire."