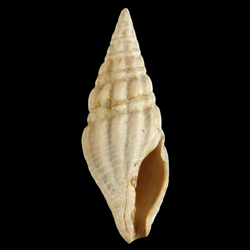 "Shell slender, the spire elevated and acutely tapering, the body rather abruptly contracted at the base. Whorls feebly convex, not very strongly constricted at the fasciole, 10 to 10%. Nucleus very small, smooth and shining, a trifle more than twice coiled; initial whorl rather tumid, immersed at the tip; final whorl flattened laterally. Line of demarcation between conch and protoconch obscure, indicated by a slight change in the texture of the shell and by the gradual initiation of the axial sculpture. Axials approximately 10 on the earlier whorls, increasing to 14 on the later, irregular in size and spacing upon the final half turn; intercostals broadly concave, approximately double the width of the costals. Spirals very feeble and restricted entirely to the intercostal area, very low and flat, 4 upon the later whorls of the spire, 8 upon the posterior and medial portions of the body, and 3 or 4 rather more elevated and more distantly spaced lirae upon the base; interspirals, except upon the base of the body, narrower than the spirals. Posterior siphonal fasciole rather narrow and sharply delimited in the later whorls by a feeble linear sulcus; the margin of the posterior of the primary spirals more or less obsolete on the costal but very distinct on the intercostal areas; fasciole usually devoid of spiral sculpture but in some shells, as in the type, obscurely lirate. Suture closely appressed, posterior cord rather distant from it and, like the suture, strongly undulated by the costae of the preceding volution. Aperture narrowly clavate, acutely angulated posteriorly, widening slightly with the feeble expansion of the outer lip and the constriction at the base of the body. Labrum commonly more or less thickened externally, wedging to a sharp edge, smooth within. Parietal wall very heavily glazed. Posterior siphonal notch broad but rather shallow, symmetrically disposed between the periphery and the suture. Anterior canal short, broad, and open. Anterior fasciole short but rather wide, broadly emarginate at its extremity.

Clavatula habra is more slender than C. vandenbroecki Maury, with a wider and more closely spaced spiral sculpture and a less constantly lirate posterior fasciole. It is, in fact, the smallest and most delicate of all the similarly sculptured members of the genus."