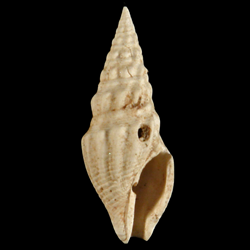 "Shell of moderate dimensions. The spire rather slender and scalariform ornately sculptured. Whorls increasing rather rapidly in size, constricted at the suture except in the apical region, the body rather sharply contracted at the base; whorls 10% in all. Protoconch very small but elevated, smooth, and highly polished, thrice coiled; initial turn rather low, broadly inflated and immersed at the tip, the succeeding volutions becoming increasingly higher and more flattened laterally. Line of demarcation between the conch and protoconch indicated by an irregular thickening, a slight change in the texture of the shell, the appression of the posterior margin, and the initiation of the axial sculpture. Axials on the early whorls short and rounded, persistent from the fasciole to the anterior suture but more prominent at the periphery, 10 on the earlier whorls; intercostal areas broadly concave; axials increasing to 12 on the later volutions, irregular in size and spacing on the final turn but for the most part persisting on the body almost to the margin of the anterior fasciole. Spiral sculpture dominated by the axial and barely perceptible upon the summits of the costae; primary lirae low and flattened, 3 upon the later whorls of the spire and about 12 upon the body; finer secondaries intercalated upon the spire and between the two posterior and the two anterior pairs of primaries upon the body; primaries upon the medial portion of the body more elevated, more sharply defined, and more closely spaced than on the anterior portion, most elevated and most distantly spaced upon the base of the body and the pillar. Anterior fasciole rather coarsely threaded with 8 rounded lirae. Posterior fasciole rather wide, defined by the constriction of the whorl and the evanescence of the axial sculpture, which still persists, however, in the form of obscure undulations; 2 rather strong subequal lirae symmetrically disposed upon it; posterior cord also rather strong but not sharply delimited, rather distant from the impressed suture, and like it strongly undulated by the costae of the preceding volution. Aperture narrowly clavate, widening posteriorly with the constriction of the inner lip and the very feeble expansion of the outer. Labrum sharp edged but thickened a little behind the margin, smooth within. Parietal wall heavily and brilliantly glazed, the callus localized near the posterior commissure, sulcated at the commissure. Posterior siphonal notch very broad and shallow, placed a little nearer to the periphery of the whorl than to the posterior suture. Anterior canal rather short, broad, and open. Anterior fasciole short but rather wide, broadly and deeply emarginate at its extremity.

Clavatula kalliglypta is characterized by the relative prominence of the axials at the periphery of the whorl and by the wide and strongly lirate posterior fasciole. Clavatula panopla, from Alum Bluff, is larger and coarser, with more numerous and decidedly more prominent axials and more numerous spirals."