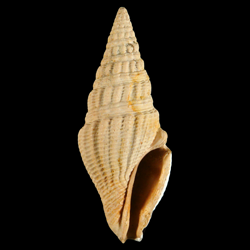 "Shell rather large for the genus, vigorously sculptured. Spire approximately the height of the aperture, scalariform. Whorls probably 9 in the conch and 3 in the protoconch. Protoconch small, smooth, and highly polished, the initial turn for the most part submerged, the succeeding volutions increasing regularly in diameter and elevation and decreasing in convexity. Beginning of conch marked by the appression of the posterior portion of the whorl and the introduction on the medial and anterior portions of short, broadly rounded, and prominently elevated axials, 10 on each of the earlier volutions; spiral sculpture and posterior fasciole first indicated on about the third turn of the conch; adult whorls sharply constricted at the anal fasciole, which is not more than one-third the width of the whorl. Axial sculpture dominant; axials rather narrow, conspicuously elevated, rounded upon their summits, most prominent at the periphery but persistent to the anterior suture and on the body, almost to the base of the pillar, 15 on the final whorl of the type but 13 or 14 on other individuals. Spiral sculpture developed over the entire conch; primaries very low and flattened, 6 on the later whorls of the spire, that outlining the periphery usually a little less depressed than those in front of it; primaries approximately 15 upon the body, becoming increasingly more elevated toward the base, equally strong upon the costal and intercostal areas; secondaries intercalated fortuitously upon the medial portion of the whorls of the spire and regularly upon the body. Fasciole closely threaded with 4 or 5 fine, sharp lirae; posterior margin of fasciole outlined by a rather heavy cord which follows the feebly impressed undulatory suture. Aperture narrowly lobate, slightly oblique. Outer lip very feebly expanded and thickened without and in some shells within. Posterior siphonal notch broad and very shallow. Posterior commissure feebly sulcated, with a small deposit of callus directly in front of the sulcus. Parietal wall smooth, very heavily glazed; anterior canal short and broad. Anterior siphonal fasciole rather broad, very closely lirate, deeply emarginate at its extremity.

Clavatula panopla is a larger and in many specimens a decidedly stouter shell than C. kalliglypta, its closest analog along the Chipola River. The axials are much more prominently elevated, and a secondary system of spirals is regularly present upon the body. It varies widely in relative proportions. The young are as a rule stouter than the adults.

The species has not been recognized except at the type locality, where it is abundant."